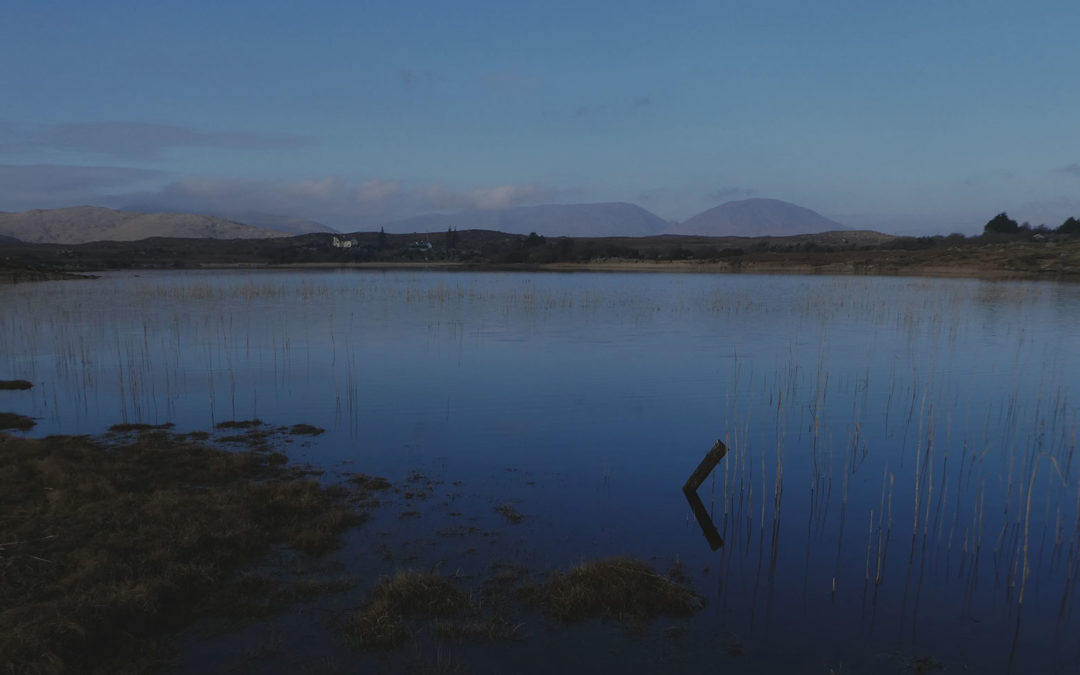 Today I am offering you this piece which I wrote while standing in a sea-loch in South Uist with David in late 2007. It was published in the very fine literary magazine Waterlog in 2008, and also in Cleave: New Writing From Women In Scotland, but has never been shared online.

There’s a mystery to fish, you said, to trout. What is it that makes one trout a brown trout and another a sea-trout? Every trout that is born has the potential to be either. Why is it, then, that one fish will stay in the lochs and the rivers and another will head off to sea? Off to sea and no-one knows what happens to them, no-one knows where they go.

And here we stand in this fledgling morning, the dawn still to come as we stand on the dark shore in our waders. No sound now except the sound of our breathing; the softest whisper of a breeze to ruffle the feathers of the water, flickering in the slowly fading moonlight. Orion no more than a glimmer, hunter hanging over hunter. Here we stand, not shipwrecked yet, washed up on a tide of longing that we could never admit to, not us, for aren’t we stronger than that? Glass vessels built for messages that we have not yet learned to decode.

We step into the waiting water, slowly slip forward, sand soft under our feet. Stealthily, furtively, not to startle the silvery fish who, drowsing gently in his bed of boulders, may yet arise from his slumber of sea-dreams to feast on a breakfast of death. An outraged wail breaks into the silence; a lapwing circles above our heads. We edge in closer, up to our waists now, as the loch rearranges itself around us. I sway a little in the dark, sway outside myself and into the dark flow of the water, following the flow and dark shadows swoop around us, harsh calls and a startling splash as the greylags land at the mouth of the loch. From air to water and back to air again, always changing, always moving on. The soft whip of the line as you cast it to see if the trout sleeps still, the old sea-rover now returned to all his childhood haunts. And what of those that stay behind, I think of asking, but we are sea-trout you and I, neither in this loch nor out of it, neither of it nor apart from it, and how can it be that a pool of water can harbour this much mystery?

You move on forward, head cocked, mouth open, as if you can taste your way to the fish, as the questing trout will taste the rivers to find his way back home. No selkies here in your world, just fish, and yet the water dissolves our skin and becomes us and the process of becoming never ends?… The sun is stirring behind us now, it rises up and lifts the morning into being … a sea wind begins to whip up slowly, an old familiar desire caressing the surface of the loch … and a single small tug on your line as the fish plays you, for the fish knows what I want to say to you but do not, for fear of breaking this wild silence. Listen, I want to say to you – listen. This is what it all comes down to; this is what it is for. The wild geese crying overhead; the soft silver kiss of a fish as it slips on by in its dawning dream of the gravels. Two people, waist-high in a dark icy loch, and a world in which even a fish can choose who it wants to be.