Love, the imagination of the heart – and that tree again 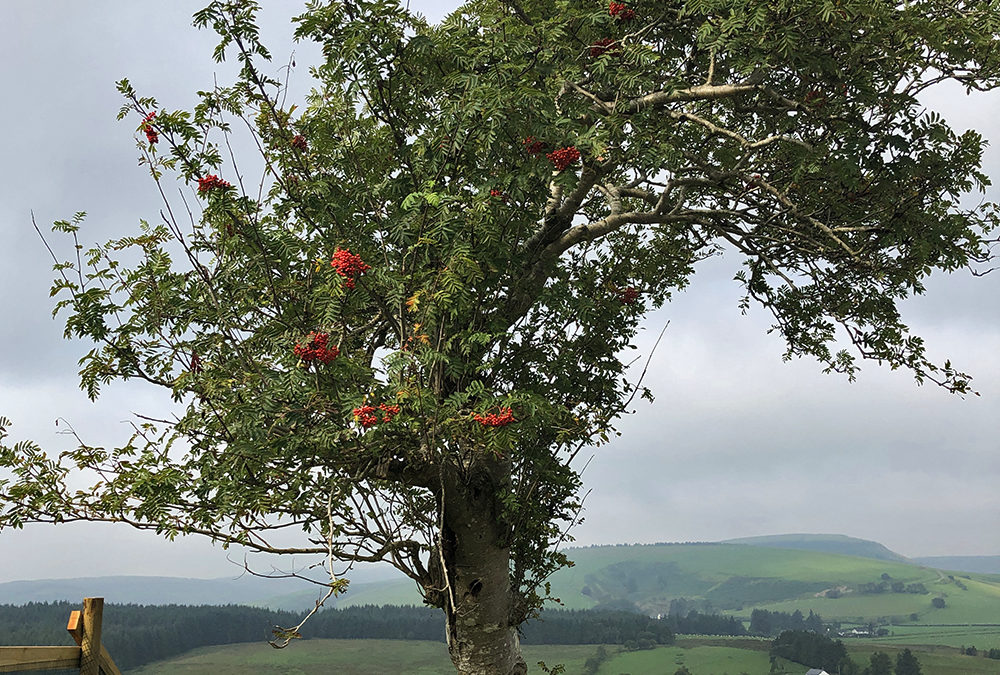 As I grow older, I’m finding that something strange is happening to my emotions. The most unexpected things can move me to tears, whereas the things that probably ought to move me to tears – or which once would have done – have little traction.

In my last post, I wrote about the old rowan tree on our field boundary, which I call the Entwife. Ancient, more hole than trunk, bent sideways by the wind, she seemed more dead than alive when we first moved here. And then one spring day, miraculously, she began to grow shoots. From her roots, from her trunk – from everywhere. And so we build a little fence around her, to protect her, so those shoots wouldn’t get grazed by our sheep.

Well, it’s a pity not to share those earlier images again, so here they are:

And then, with the ripening of summer, another miracle. Berries! A couple of days ago, I was congratulating her on her bounty, on her remarkable ability to bring forth life from what looks for all the world like death, and I found myself suddenly overcome by a remarkable intensity of love for this tree. I sit and talk to her two or three times a week, perched on the stile which David built so that I could cross over the protective fence and into her sanctuary. And as a consequence of that continuous converation, I seem to have come to love her deeply.

As I carried on down the lane weeping (yup, as I said, the most unexpected things make me cry these days) with the pleasure of that growing relationship, I was thinking about German philosopher/ phenomenologist Max Scheler, whose work I came across recently. In a nutshell, he wrote about love as a way of listening to what the world has to say to us. Love as a necessary quality that we must bring to our connections with other beings in the world around us, which allows them to offer themselves up to us as they really are.

If you think about it, it’s like human relationships. For example: if you enter into a discussion with someone different from you – someone with a different perspective – with the intent of proving them wrong, beating them down, or belittling their opinions, then clearly you are not adopting this approach of open-heartedness to the world and the other beings which share it with you. And, not surprisingly, the person you’re ‘conversing’ with isn’t then going to reveal herself to you in any meaningful way at all. She’s going to shrink back. There’s no revelation here except the strength of your ego.

So it is with the world. Love, then, from Scheler’s perspective, is more than just an attitude, it’s a spiritual stance: a way for us to know things as they truly are; a way to have the world open itself to us, just as love in turn opens us to the world. Love is, above all, an act of participation.

And love, in this sense, was exactly what I experienced with the Entwife. By sitting with her in an open-hearted way, participating fully and paying deep attention to her, then in some way that I can’t properly express, she revealed herself to me. And I understood that she was beautiful, exceptional, and full of life and heart, in her gloriously rickety, gnarly old way. She was the green and growing at the heart of the dormant; the rebirth at the heart of death.

That revelation which other beings might offer to us, if we approach them with love and participatory attention, occurs and is transmitted at some level on the imaginal plane. And I’m reminded too of Henry Corbin, the French theologian who translated and interpreted ancient Sufi texts, and his assertion that the heart is the seat of the imagination; that imagination is the authentic voice of the heart.

If psyche, as depth psychologists from Carl Jung to James Hillman have asserted, is image; and if the heart is the organ of imagination; then psyche – soul – and in particular, the act of soul-making – can only ever be fuelled by love.