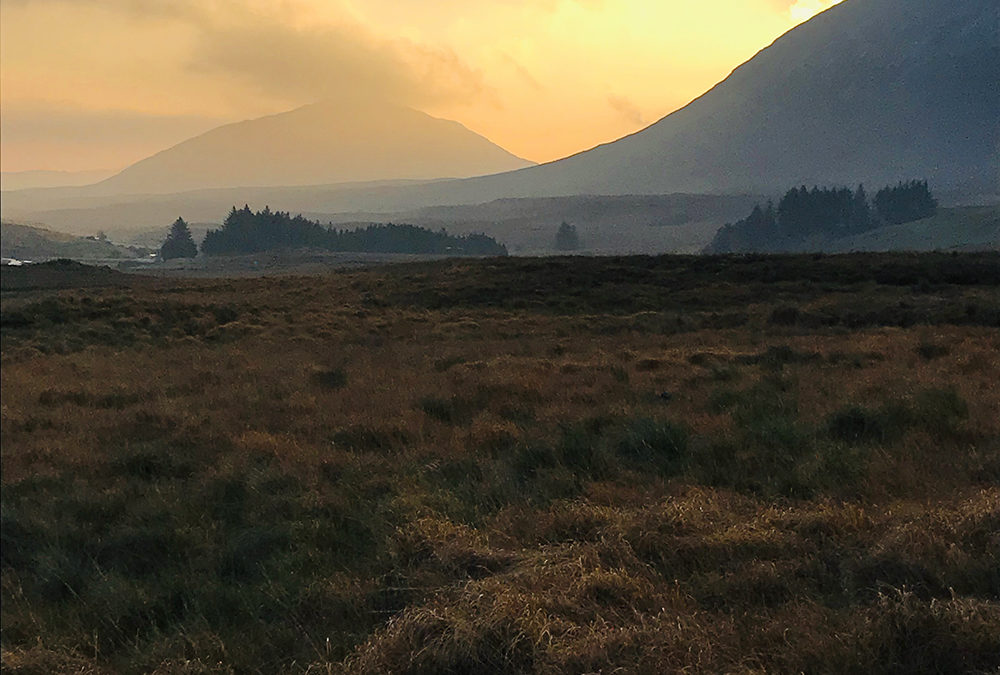 Those of you who’ve ever attended any of my workshops which are focused on place and the mythic imagination will remember that I’m always waxing lyrical about geology. About the need to know, and to understand, the rock on which our feet are planted.

The magic of understanding the geological influences that surround you in the place where you live was brought home to me a few years ago, when I was living in the most remote part of the Isle of Lewis, an already quite remote enough island in the Outer Hebrides. We lived in the far south-west of the island, sandwiched between the stormy Atlantic and a range of ancient mountains crafted of Lewisian gneiss. Lewisian gneiss is a metamorphic rock, forged out of intense volcanic heat and pressure, transformed and restructured by it down all the long ages. This is some of the oldest rock on the planet – around 3 billion years old – and it shows. The mountains there look like the wrinkled, ancient, grey brains of the earth.

The geology of a place profoundly influences the spirit of a place, and the ways in which we respond to it. We understand this, whether or not we vocalise it, from an archetypal perspective. Granite uplands are harder, grittier places than soft, green, chalky downs, and the people who live in those places seem somehow to reflect that. So if you spend four years living in one of the most remote and least inhabited parts of the British Isles, with the spirit of age-old Lewisian gneiss seeping into your heart and bones, the lessons of that place are going to be ancient and uncompromising. And the lessons I learned there, as any of you who’ve read If Women Rose Rooted will know, were hard. The archetypal qualities of that place were ancient and uncompromising, for sure.

One of the many reasons why that place affected me so deeply was that sense of the ancient which permeated every inch of it. Down on the headlands, you could still see the remnants of human influence – but not very much of it. All of it hard-won, and snatched back by the land as soon as the humans in question paused to take a breath. Because this was peat bog, and extracting a living from it is only a little less work than wrenching a living from the desert. Most of the things we find useful just don’t want to grow. Only animals who can survive on very poor fodder (and only humans who can do the same) thrive there. And so the place had largely been abandoned during the last few decades; living in it was all too much work. So the carefully crafted stone walls which lined the fields crumbled, and the stone houses caved in, and the rushes recolonised the fields which previously were so carefully limed.

There is a sense in such landscapes … well … not that humans are necessarily unwelcome, but that you have to earn your place in them. And not just by hard physical work. They’ve seen it all before, these places: seen humans come and go, flower and break, and only the tiniest few ever pick themselves up and flower again. They’ve been loved and abandoned, and they’ve been inhabited by too many grim-faced people who can never fully love them. On the surface of it there’s an apparent indifference which at first I found oddly reassuring – but when you let yourself fall into the uncompromising vividness of their dreaming and let those places begin to love you, they love you with everything they have.

And so when, in my last post, I wrote that the New Mexican desert reminds me of this same quality that I find in the bogs and mountains of Connemara, that’s one of the reasons why. The crumbling limestone of Abiquiu’s Plaza Blanca reminds me of the vast age of this remarkable, living planet. This elder Earth in which we are fully enmeshed. Just as the ancient granite mountains I walk among here whisper to me of the long aeons before a human face was ever imagined. And of the Cailleach, that old woman in our mythology who created and shaped the land, muttering to herself: ‘When I was a young lass, the ocean was a forest, full of trees.’

I find comfort in the Earth’s relative permanence amidst our obvious impermanence. The Celtic imagination thrives on such contrasts, and mine is no exception. I find comfort in knowing that the prevailing western winds touched the face of these mountains before they ever breathed on mine. At that, in some fashion, crumble and fall as it sometimes might, all of this will outlast me.