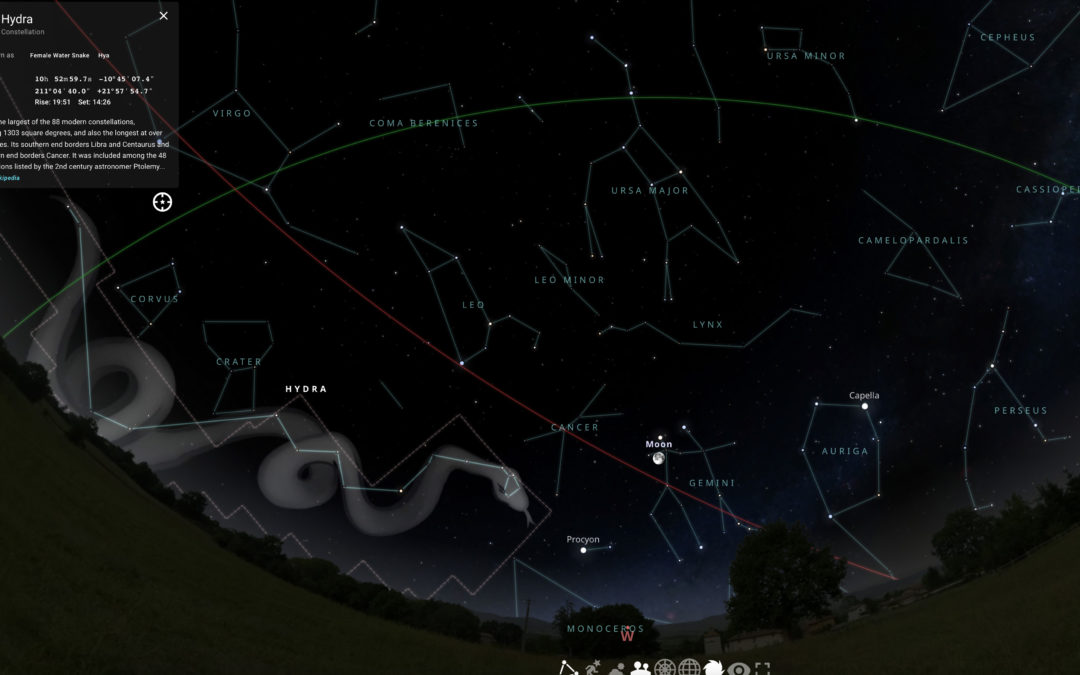 At this time of year, Winter Solstice, I’m always overcome by the beauty of the dark. All the more so, because after the still point of this turning world has passed, we slowly begin to lose it. And so Solstice, for me, is a time of both celebration and mourning. I welcome the return of the light – but it comes at the cost of the slow loss of the dark.

This year, I’ve found myself returning to an old, old passion for stars. Yes, the kind that are up there in the sky. In my teenage years especially, I was deeply in love with the night sky. I would pore over whichever star atlases I could get my hands on, reciting the names to myself like an incantation. Every name held a magic which I could sense, but couldn’t name. Arcturus, Capella, Deneb, Procyon, Betelgeuse, Vega. Every star had a story, a song of its own. On the few clear nights that came along in winter, I’d sit outside, trying to identify the constellations. I was deeply steeped in mythology; I knew their stories too. My favourite was the constellation of Taurus, because it harboured the Pleiades: the beautiful Seven Sisters. I would talk to them sometimes; they seemed as real to me as any other beings. In Welsh, they’re called the Twr Tewdws; in Irish, an Streoillín.

I fear we’ve lost our connection to the stars. So many of us on this planet can hardly see them any more, washed out as they are by nighttime light pollution. And for those of us who have darker skies, we’ve forgotten how much they once mattered to us. How once, they not only lit up the night, but provided us with signs to navigate by. They held our stories, too: like Ursa Major, the Great Bear, whose mythology likely dates back into prehistory. Or the Chained Lady, Andromeda, named for the daughter of Cassiopeia in Greek myth, who was chained to a rock to be eaten by the sea monster Cetus – until she was rescued by Perseus.

Recently, I came across a great gift: a link to a web app called stellarium, which shows the major stars and constellations in the sky wherever you are. As you can see from the image at the top of this post, I have it set to look west, which is the way both my bedroom and my study face, out across the Cambrian mountains of mid-Wales. At 7am this morning, the great and mysterious constellation named Hydra was stretched out across the western horizon, embracing the tops of those mountains, and slowly setting beyond them. The shape of Hydra resembles a twisting snake, and features in some Greek myths. One associates it with a water snake that a crow served up to the god Apollo in a cup after it was sent to fetch water; Apollo saw through the fraud, and angrily cast the crow, cup, and snake into the sky. It is also associated with the monster Hydra, with its many heads, which was killed by Hercules – who’s represented in another constellation. When I looked out of my window this morning, even though the sky was filled with clouds and nothing of the Hydra was visible to the naked eye, I knew she was there, that great water-serpent. And I greeted her.

Once, the stars were our friends, our companions, and sometimes our gods. Now it seems we’ve forgotten them just as we’ve forgotten so much in the world that is beautiful and mysterious and yes, perhaps even sacred. For me, reacquainting ourselves with the stars and the contellations is part of what I call exercising the mythic imagination, re-enchanting ourselves and our world, re-storying the cosmos. What can you do, in the coming year, to sharpen your focus on cultivating your mythic imagination? I offer you some suggestions below.

As I do at this time every year, I invite you, in the year ahead, to focus in on cultivating your mythic imagination.

Image of the Year

Each year I like to find an image, or sometimes a word, which represents what I need to bring into the year ahead, as part of the ritual of moving from an old year into a new one. I choose it in a meditative space, after lighting a candle which I then focus on as I allow images to form in my mind, where I hold them until the one that feels right comes to the fore. My image sometimes reflects qualities I want to embody, or qualities I want to attract into my life during the year ahead. Sometimes it will reflect a quality I need to let go of – and it’s important not just focus on positive qualities and things which you would like to attract to you; think about what you might need to release, too. Sometimes the image is very clear; other times its meaning is rather more hidden from me. That’s fine too; uncertainty brings its own kinds of blessings.

After you’ve found your image, spend some time sitting with it. What does it mean to you? Write down all the different facets of it which seem relevant to you. What might it look like, and feel like, for that quality to show up in your life, or for that quality to be let go of?

Then what might be required to make it happen? The setting of specific goals and targets, or something rather less tangible, such as a shift in mindset? Don’t feel obliged always to focus on DOING. Think about gentler words, like becoming. Sometimes it’s okay to grow less certain about some things, rather than more; life isn’t a linear progression, but a great, rich spiral.

Your intentions for embracing the mystery, for cultivating the mythic imaginaiton

The basis of all of my work on the mythic imagination is, at heart, about delving into the Mystery; and so my invitation to you, for the months ahead, is to work with these suggestions for embracing the Mystery in your life.

Courses to help you cultivate the mythic imagination

If you’re interested in working more deeply with the mythic imagination during 2022, these two on-demand, self-study courses are designed to help you do so.

THIS MYTHIC LIFE – delve deeply into the world of archetypes, myth and stories; find out more here.