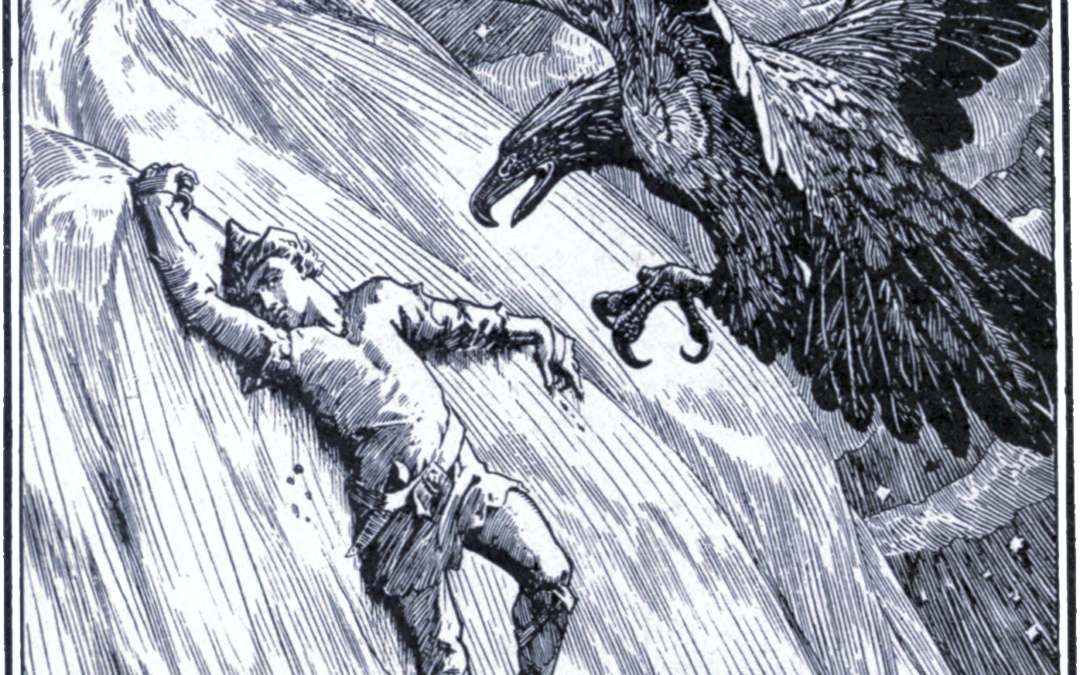 The glass mountain. Beautiful, but utterly unattainable. Too large to walk around; impossible to scale. You simply can’t get any traction. There are no footholds, and as soon as you set your foot on the glistening slope of it, back down again it goes. All the way back, all the way down. And yet everything you need is on the other side of it. Everything you’re yearning for – all the things you know that you must have, and all the things you can’t yet begin to imagine you might. All the things you’ve lost, allowed carelessly to slip away from you. Lost loves, lost treasures. Lost parts of yourself, carried away by the monsters you didn’t see coming.

A young girl marries a big black bull who turns out to be an enchanted prince. When she fails to obey his instructions to sit still on a stone until he returns from fighting an old foe, her new husband is lost to her. Searching for him far and wide, she comes finally to an enormous glass mountain which blocks her way. Around the bottom of the mountain she wanders, sobbing, but never finding any way over it. At last, she comes to the house of a blacksmith, who promises, if she will serve him for seven long years, that he will make her a pair of iron shoes which would allow her to climb across the glassy hill. She puts in the hard work, completes her apprenticeship, puts on her new shoes, and away she goes, away to the land of her heart’s desire.

The seven brothers of a young woman who is ill set off to a healing well to fetch water from her, but their jug falls into the well. When they don’t return that day, their father curses them, and turns them into seven ravens. When their sister is grown, she sets out in search of her brothers. She tries first to obtain help from the sun, which is too hot; then the moon, which only craves human flesh, and then the morning star. The star helps her by giving her a chicken bone, telling her that she will need it to save her brothers. She finds her brothers inside a glass mountain. But she has lost the chicken bone which will open up the mountain to her, so she chops off a finger to use as a key. She finds them there, and they are saved; together, they return home.

On another glass mountain, in a land far across the sea, grows a tree which bears apples of gold. Just a single apple will allow you to enter the golden castle where an enchanted princess lives. Many men have tried and failed to attain that apple, and their bodies are scattered around the bottom of the mountain. A knight in golden armour attempts the task, trying for many long days. One day, he tries for the top of the mountain, and is climbing steadily up it when an eagle attacks him. He and his horse fall to their deaths. A schoolboy kills a lynx, and scales the mountain with its claws attached to his hands and feet. Weary, he rests for a while, halfway up the slope. The eagle imagines that he’d make a good meal, and flies on down to eat him. But the boy grabs hold of the eagle and, trying to shake him off, it succeeds only in carrying him the rest of the way up. At the top of the mountain, he cuts off the eagle’s feet, and promptly falls into the tree which bore golden apples. The peel of an apple cures his wounds, and he picks more, which allows him into the castle. He marries the faraway princess, the inaccessible one, the queen of his dreams.

The glass mountain. Beautiful, remote, pitiless. Utterly itself. Proud sentinel, guardian of the path to paradise.

When I was in my mid-thirties, I scaled a glass mountain. I apprenticed myself for just a year to the North, South, East and West Winds, and the merciless fire-gods of a great southwestern desert. At the end of that year, I received the treasure which finally would set me free.

Or: it was in the New Mexico desert that, at the age of thirty-nine, I completed the last stage in my year-long journey of learning to fly to overcome a fear of flying. I tested myself against extremes of heat and wind, and in that crosswind-buffeted, afternoon-turbulent, eccentric Wild-Western desert, I took my final test with an equally eccentric, crusty old ex-US Marine who called me ‘little lady’ at least ten times, but laughed like a lunatic and congratulated me for my ‘gumption’ when I refused to follow a navigation suggestion of his that I didn’t consider to be wise. During that year of dancing with Death in turbulent American skies, I felt more alive than I had ever felt before. By the end of it, standing now on an arid desert runway, clutching the flimsy pink slip of paper that I could trade in for my pilot’s license, I was utterly transformed. If I could do this, I firmly believed, I could do anything. And the first thing I did was finally to break free from the stultifying corporate job that had represented safety for too many years, and I thoroughly reimagined my life.

Life on the other side of the glass mountain isn’t always easy; it was never intended to be. The story doesn’t end there. Our stories never end there. Once you’ve crossed that first glass mountain, you’ll be forever haunted by the ghost of it. Glints and glimmers at the edges of your vision will tantalise you; news of fresh sightings of it will seek you out and beckon you on. Perhaps, next time you attempt the crossing, you’ll slip out of the eagle’s claws, down and down and on through that long delirious burning blue, and die. But maybe you won’t. Maybe the branches of the golden tree will snag you and save you, after all. Maybe you’ll find that new treasure you didn’t even know you’d been looking for. The treasure that will transform you utterly … until whispers of that big old glass mountain come around again.

Though I am old with wandering
Through hollow lands and hilly lands,
I will find out where she has gone,
And kiss her lips and take her hands;
And walk among long dappled grass,
And pluck till time and times are done,
The silver apples of the moon,
The golden apples of the sun.